A very long time ago I was a young architecture student in Brooklyn. Pratt Institutes's School of Architecture was, at that time, a wild, ungraded, non-competitive place with no dominant style, and only, perhaps, a commitment to contextualism and social justice holding it together. One night they showed The Fountainhead

and the the audience in Higgins Hall booed Howard Rourke/Gary Cooper intensely at the end. Ayn Rand's selfishness would find no footholds in the Fort Greene of the 1980s, but I digress...

In a design studio one semester we were greeted with a poster announcing a contest to design "The McDonald's of the Future." At first this seemed frivolous - we had been working on things like libraries, hospitals, the Vietnam Veterans' Memorial - and now? Fast food?

But encouraged to take it seriously I began an investigation which changed my sense of design forever.

I grabbed a sketchbook. And with that sketchbook I wandered through every fast food restaurant I could find. The urban storefront ones in downtown Brooklyn and the standardized suburban restaurants. I also plumbed my memory, thinking of that "first" McDonald's on US-1, and the trips there in the old Rambler. All of us eating in the car - there was no inside. And thinking of one winter night, stumbling off a frozen Interstate 96 in Brighton, Michigan - hitch-hiking between East Lansing and Ann Arbor - and finding the warm glow of a McDonald's on the horizon.


I realized that no building I had ever seen was more "purpose-built" than a McDonald's restaurant. Everything, absolutely everything, was design to (a) lure you in, (b) make you hungry, (c) get you out, and (d) make it easy to clean up after you. Other fast food buildings of the time, though often pretty good at expressing their differences (Wendy's were carpeted with those plastic Tiffany lamps - attempting to say "upscale," Burger Kings were "woodier" - more "adult"), didn't come close.

Example: All the Burger Kings of the time had their service window just inside the doors, on the left as you entered, with "dining" space on the right. All "new" McDonald's of the time (those 'post-Golden Arches') had the service counter in the back. If you drove, or walked, past a Burger King you saw people waiting in line, if you you rode, or walked, past a McDonald's you saw happy people eating.

Example: The McDonald's of the 1980s might be garish inside, but it glowed yellow - a warm glow of childhood memory - to all of my age who had discovered it as children. Burger Kings and Wendy's looked dim from outside. Fine if you were headed to a pub, but... And why did we have such great childhood memories? Not because of what McDonald's had added to the American Drive-In, but what was taken away. The restaurants which went global under Ray Kroc eliminated four 1950s/early 1960s mainstays which attracted crowds of rowdy teens - the car hops, the juke box, the public phone, the cigarette machine - and thus made "Micky D's" the place families went.

OK, this isn't really about McDonald's. It's about your school.

What is your school designed to do?


The typical American school follows the design parameters laid down by Henry Barnard in the 1840s. He took the school room as designed by William Alcott two decades earlier and assembled it into a factory for learning. "Double-loaded" corridors created an assembly line for the Prussian System of learning according to chronological age - further separated by room (secondary) or by the clock (primary) into discrete areas of study. "The Facher system, as it is termed in Germany where it is most popular, consists in employing separate teachers for separate studies, or as we should apply it here, for distinct departments of government, and of instruction. This is the principle on which instruction in our colleges and most of our higher seminaries is given, and is in reality the mixed method carried to its highest perfection. The vital error in our common schools, as they are now organized, is the practice of employing one teacher for the government and instruction of fifty or sixty children of every age, of both sexes, in a great variety of studies, and in different stages of proficiency in each study." (Barnard 1848 p.80)

Barnard is very specific: "The school-room should be a parallelogram, the length about twice the breadth." (p. 81) "The lower parts of the windows should be at least 6 feet from the floor, in order that the light may not be inconvenient, and the walls be at liberty for the reading lessons, etc., which are to be attached to it." (p.81) "The center of the platform is the place for the masters desk; and on each side there may be a small desk for the principal monitors." (p.81) "The entrance door should be on the side of the platform, in order that visitors on entering the school, may have a commanding view of all the children at once." (p.82) "Over the black-board, are the printed and written alphabet, arithmetical and geometrical figures, the pauses, &c., for copying or general exercise." (p.95)

Barnard describes everything, from desk heights to symmetry in entrance halls. He establishes the need to truly separate the classrooms from the play-grounds. He installs blinds on the windows. Thankfully, he sets ventilation requirements. And, in so many ways, the schools he describes are those we have today.

What are your schools designed to do?

The last time people really tried to re-imagine the American school building it produced the "open classroom schools" which are now all carved up. These schools were built around big open spaces designed for between 100 and 150 children, which can be brilliant, unless, as all these schools attempted, you try to run 4 or 6 traditional classes in each giant space. Teachers tried to do just that, and the "open classroom" - and school re-design - got a bad reputation because of a complete failure of school leadership to re-imagine learning.

But it is time. Today, from the first moment your kids arrive at school we divide them and organize them. We tell them that the absolute priority is to get where they've been told to go on time. Should that be our first message? Today we announce to children that learning happens in a specific place - their specific place. That learning happens now, but not then. That learning is something which starts and stops according to Pavlovian training. Are those the messages we intend to send? Today we continue to divide children up, not by interests or passions, not even by specific capabilities as William Shearer (1894) wanted, but first by age and then - typically - by chance - you got this teacher and you got that teacher.

And then we line our students and teachers up as eggs in a crate. Isolated. Disconnected. If kids here are learning this, kids there gain nothing from it.

But our schools could be different. Take a look at these Danish schools... one newly built (top), one renovated (bottom)... 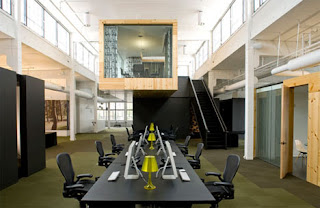 These schools send different messages, require different pedagogies, and create an entirely different sense of what learning means. They are not the schools of 1848 or 1898 or 1948 or even 1988, but then, our students are going to emerge into the world of 2018 and 2038, and if we look at workplaces even today - say Google or Quicken Loans or YNNO or Haworth or wherever, you will find that today's work environments don't much look like your schools either. Your schools are designed to turn out employees who work in offices like those picture in Jack Lemmon's The Apartment, or who work in factories best portrayed in Charlie Chaplin's Modern Times. Even the American universities we are supposedly preparing our children for long ago abandoned most of the nonsense... the rigid time schedules, the lack of recess, the required attendance, the assigned seating, the lack of choice which characterize huge parts of our school design. Can anyone besides our US President who has actually seen both a KIPP school and an Ivy League campus actual think that the former - in any way - preps students for success at the latter? 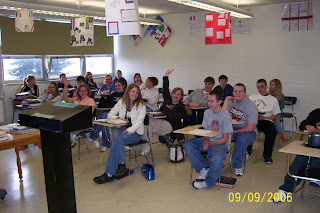 So take a walk around your school. Think, "spaces matter." Consider, even if you cannot reconstruct, how to re-imagine. Where can kids - of all ages - sit and collaborate in your hallways? Why do you have desks in your classrooms? Don't kids hate sitting there? Why do you have whiteboards mounted in one place? Wouldn't tablets or tabletPCs be better? Why do you have bells and discrete subjects? Shouldn't learning be integrated? Why do you have grades set by age? Aren't you eliminating both mentoring and the chance to rush ahead? Why would a teacher ever close their classroom door? Should learning be a secret?

Spaces matter because as human animals we all respond to our environments. And if your kids are all sitting at desks, if your classroom has a "teaching wall," you are back with Henry Barnard, you are creating children prepared for the world he wanted.

If that's not what you want, re-think, and re-design.

When I toured HMS School in Philadelphia, they had a sensory room with a chill out chair and hammocks and all kinds of other great stuff. I wrote about that tour and my reactions to it here

The following day when I mentioned chill out chairs in a session at EduCon, an educator piped up and said that children would then misbehave just so they could chill out. Can't have that. I understand why school is more of a punitive place than a fun place, but I disagree with that.

When I returned to Chicago, I attended IEP meeting and asked if older daughter could again have vestibular swing when she was in HS. She had that for four years and then when her program got sent to one school and she went to another, that swing got lost in the shuffle. Last year I would told to ask for it in IEP for HS. And she cannot have the vestibular swing because "there's not enough room." Why does she not get something that she needs and is beneficial to her?

Why are educators so afraid of comfortable spaces? Can make a world of difference

This is such a cool blog. I cannot wait to explore.... Love this post, too! Thanks for this.

Looks good, but some of these new designs don't look very accessible, for people using wheelchairs for example. Not that our old schools necessarily are, but I would just hope that in new designs that aspect would be considered more.