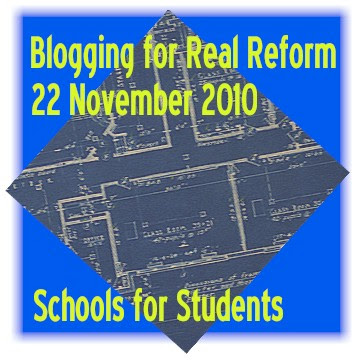 There are two groups battling over education these days, whether you live in the United States, in the United Kingdom, Australia, or elsewhere.

One group, including some of the wealthiest and most powerful people on earth and the biggest corporations - Oprah Winfrey, Arne Duncan, Bill Gates, Eli Broad, General Electric, many Ivy Leaguers, and a bunch of ultra-rich hedge fund managers - have proclaimed themselves the saviors of our schools, and with their vast resources, they have squeezed all dissenting views out of the national media.

The essential idea is that, education being an industrial process, if it is not working, it must be the fault of some combination of the raw material

(the students) or the production line workers (the teachers). (see the pathetic Rhee/Klein manifesto for the ultimate version of this, as many have pointed out)

This presentation of the problem ensures that the system - which has always worked well for the rich and powerful - does not change. Plus, as a side-benefit, it destroys unions and forces unsuccessful communities onto a treadmill which guarantees that they will never catch up.

But there is another group, and another narrative. This narrative arises from people with more experience in education than Michelle Rhee's two years in Baltimore or being handed a job without qualifications by Richard Daley, Mike Bloomberg, or even Barack Obama. This is a student-centered narrative of systemic change. It is a narrative which understands the fundamental issues facing our students. A narrative which understands, in the words of the Sacramento (CA) schools, that "there is no magic bullet to our problems, no easy answers. But collectively and collaboratively, I believe we have enough power to change the lives of the children we serve." We can't get NBC or Oprah or The New York Times or even Barack Obama to pay attention yet, but we can start the conversation from below.

I'm asking you, those who know schools, and who seek real reform, to blog with me and others on Monday, November 22, 2010. Describe the change you think education needs - in America, in the UK, in Australia, in Ireland, in Canada, wherever. The date is "American" - it is designed to push the conversation as those in the US gather with their families for Thanksgiving, but the idea is globally important.

If you add a link to your post in the comments section of the "Blogging for Real Reform" post which will appear here on November 21, I will link to it - whether we agree or not - no matter what you say - short of hate speech. And then I'll ask you send your blog post, and a link back to the collection, to as many of your local news sources, and local leaders, as you can.

Ira here is the link to my thoughts on Education Reform.

I am a fourth year psychology graduate student and I am conducting a survey to determine what obstacles public high school special education teachers are encountering when attempting to teach sexuality education. This project is a social justice piece and any help would be much appreciated. Please feel free to forward this link to any public high school special education teachers that you think might be willing to help. Thank you for your time.

Regardless of social status, who you are or any other defining factor there will always be people out there that have little more to do than target you. Who knows why, they're just there.

No matter how right something you do or say is, someone will say its wrong. That same person will likely go out of his or her way to prove its wrong even though it isn't. That is just life and it doesn't get any better the deeper you look into it. Sad but true.