Before we can talk about accommodations in the classroom, we need to begin to understand humans and their tools, and thus, the definitions of technology.

The issue is that schools are not at all "anti-technology" - quite the opposite. Schools embrace all the ed tech introduced by Horace Mann and Henry Barnard in the mid-19th Century. Desks and individual seats with backs. Rectangular classrooms with windows on one side. Black-Boards (or their successors) hung in the front of the room. A school day in which everyone was expected to attend from "bell to bell." Printed books ("the most significant technological invention of the last millennium" according to The Guardian). The school calendar. The idea of dividing children by age into "grades" (a radical idea imported to the US by Barnard from Prussia). Maps on the wall, the flag in the corner. OK, yes, paper had been introduced earlier, pencils would come a bit later, but all of these were intentional inventions of humans who were designing an educational system. So was the "standardized test" - that 1867 invention of the New York State Board of Regents.

All of these technologies have been "naturalized," of course, so we no longer see them as technologies. And we need to wonder how fair that is to those who might do better, be more comfortable, with newer, or other, technologies.

So I asked my students to join me in a VoiceThread investigation of what "technology" and "assistive technology" means.

I began with this: from the discussion tab in Wiktionary -

"Technology is a word that is made of two greek words. Techne and Logos.

"Technology is therefore "thinking about the best way to do things. - Eric

"Etymology of these both words is more complicated than that. Techne (also spelled tekhne) means art as in skill or craft (if we want to see a difference between art and skill). Logos means "language", "reason", "reasoning", or even "world". Also, technology isn't just "thinking", it is also constructing and manipulating the world. wikipedia:Martin Heidegger saw technology as a mode of thinking where everything that is, is seen from the perspective of manipulation. He said this the prevailing mode of thinking today. - Nikke" 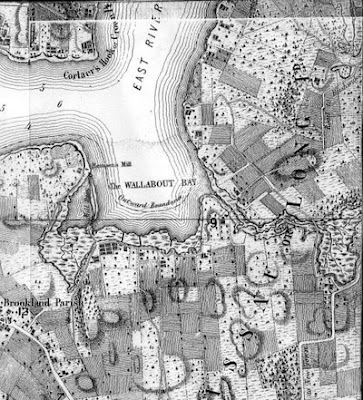 The narrowest point in the East River in New York City
On the VoiceThread, which you can listen to right here, each slide begins with me introducing a technological challenge. What skills, what capabilities, what tools do you need to travel between New York neighborhoods? To absorb a story written 90 years ago? To bring a refrigerator home? To get to the 88th floor of the Sears Tower? To write a story in a way that others can read it?

After we began our VoiceThread conversation, I sent my class the following note, title: "What is technology?"

Let’s begin with the first VoiceThread slide, the trip from Canarsie (on Brooklyn’s Atlantic coast) to the Turtle Bay neighborhood in Manhattan (the UN area). I chose these because they are two places clearly settled long before Henry Hudson first sailed in to the harbor 401 years ago.

Imagine the trip in the present, then imagine it in 1609.

Manhattan in 1609 via The Mannahatta Project
In the top image here you can see the “narrow spot” in the East River, a fast flowing tidal strait that moves with the tide action. In the next picture you see a vision of Manhattan in 1609 (the shadow represents the current landmass – see http://themannahattaproject.org/). The “narrow spot” I just talked about is just out of the scene to the right, but if you look north you can see another opportunity for crossing, where what is now called Roosevelt Island splits the river. Of course getting to that spot from Canarsie might mean covering lots more forest, and perhaps crossing a major stream which we call Newtown Creek and which divides Brooklyn from Queens (you can just make out the entrance into the East River to the right of the picture).

I bring all this up not as a history lesson (though it is a fun history lesson), but to demonstrate how our ideas of technology change and “naturalize.”

In 1609 a Manahatta or a Canarsie making the trip – and make the trip they did (it has oft been rumored that it was the Canarsie who “sold” the Manahatta’s island to the Dutch in 1625) – would have considered moccasins technology, and the clothing that prevented brambles from ripping his/her skin, and surely the dugout canoe which probably beat swimming for it. Plus the trail that crossed Brooklyn from the shores of the Atlantic to the East River (now called Flatbush Avenue).

Today, we might not even see the roads, railroads, and bridges as technology, though just a bit more than a hundred years ago those items pretty much defined technology.

So, like the teacher who says, “All I need is a chalkboard, some books, and a classroom,”(1) we tend to assume that anything we are familiar with – anything “invented before we were born” – is not “technology” but “natural.”

In schools books, desks, chairs, pens, pencils, papers, chalk-boards, the school timetable, eyeglasses, the cars which bring teachers to school, even the stairs which make it much easier to get to the second floor, have all been “naturalized.” Yet all were once “introduced” into education, many controversially.

And my argument is that every technology both enables and disables – it simply depends on the individual.

So, the human “default” method of getting from Canarsie to Turtle Bay would be walking and swimming, protected by your own skin. For climbing 900 feet high it would be, yes, climbing. Carrying a heavy object? Picking it up and carrying it, or collecting enough other humans to join you if it is really heavy. Transmitting stories? You speak, they listen, or vise-versa. Everything else which “assists” is “technology” – from shoes to roads, from stairs to ladders, from straps to wheels, from paints for cave art to paper to radio.

But with each technological “advance” there are some who can take advantage of it and others who cannot. A person without eyesight is not nearly as “disabled” in a place of verbal information transmission as they are in a world of visually transmitted data (think Homer). The learner who cannot “sit still” is not “disabled” until the classroom and the chair are joined together. 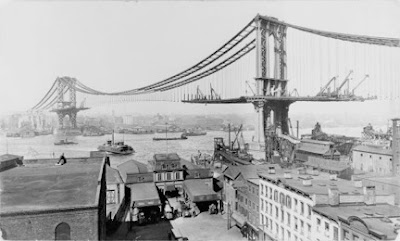 It took Europeans over 260 years of living in the New York area before they managed to bridge the East River (here the Manhattan Bridge – the bridge closest to that “narrow point” – is under construction in 1909)
And for those of you who were going to drive to the 42nd Street and First Avenue area of Manhattan: if it costs you $65 to park there, does that change your capabilities? What if you could not afford the $4.50 round trip subway fare? In other words, how does socio-economic status impact our ideas of “ability” and “disability”?

If you have the wealth to own and insure a car in New York City (and to have paid to get a drivers license) and the wealth to pay for Manhattan parking, the inability to walk 20 blocks at a time, four times a day, is not “disabling,” but if you cannot afford that, and you had to walk from your home in Canarsie to the bus stop, then climb the stairs from the bus to the subway, then walk from the subway to your job through a very hilly part of Manhattan, then do it again when work was done, a little “shortness of breath” can keep you from your job. But we would rarely call a car “assistive technology.”

I often say this: I am “disabled” if you give me paper and a pencil. I have dysgraphia. I am disabled if you give me an “ink on paper” book to read or you ask me to read your handwriting on the chalkboard or whiteboard, I have dyslexia. I am disabled if you expect me to sit in a chair, in a room, for 40 minutes straight, I have ADHD. But if I am working on my computer, able to move as I need to, with the TV on at home or, say, dozens of people chatting around me in a coffee shop, I am not disabled at all. I am very able.

What about your students?

(1) "All you need to teach English are books, desks, paper, pens, and a chalkboard. You don't need any technology--just use what's there." - a university professor quoted in Steven D. Krause. "Among the Greatest Benefactors of Mankind": What the Success of Chalkboards Tells Us about the Future of Computers in the Classroom."  The Journal of the Midwest Modern Language Association, Vol. 33, No. 2, Computers and the Future of the Humanities (Spring, 2000), pp. 6-16.

Ah, the fallacy of exceptionalism just never fades does it?

We, as in (still) larger body of teachers, admins, parents, politicians & pundits, react with either fear or awe (hence the exceptionalism label) when it comes to the digital technology afforded to us today. And that's not doing us much good, on so many levels...

Only yesterday I was sitting with colleagues (all software developers, passionate & veeery good at what they do) at my new work at Moodle HQ and joked: "You guys are trying to make this thing [Moodle] exciting, shiny, new and powerful, my job is to make it boring and 'normal'. "

I got a few confused looks...

I explained:"The sooner educators move beyond the point of fear & awe of Moodle [or any other tech] and see it as a tool just like a pen, desk, whiteboard, book etc. the sooner they will be used better and more frequently to reach the pedagogical goals (add social, economic, environmental etc). Let's stop fetishising tech, work out what it's good for and then use it do get where we want with the people we teach, work with."

Connecting on this post was great fun for me. I used Voice Thread for the first time ever; it's really fun, and I was reminded of that great graphic novel/blog, Ulysses 'Seen.' that you pointed me toward last June 16.

I had been writing today, too, about technology and creating books and using language which fit right into the make a book exercise. What I wrote today is here -http://developingprofessionalstaff-mpls.blogspot.com/2010/02/new-technologies.html

I'll also be looking with a new respect at my dyslexic and ADHD students in the morning.

Perhaps a Rube Goldberg is an example of an unassistive technology.