As we finish the last year of the first decade of this century, it is time to take stock of your school. What century is it when students walk through your door?

In today's New York Times Week in Review there is an article about our online digital tools ability to begin recreating the best of education - the Oxford Don, one-on-one approach which predates the industrial processing mode which defines education in the US today. "21st-century technology carries the potential to nudge mainstream education back toward the 16th-century vision of one-to-one tutoring," the article says, in other words, after 400 years of believing in a single technology for education - the fixed, unchanging, impossible to personalize Gutenberg book - we now have technologies to restore humanism and individuality to education - but this time - on a mass scale. 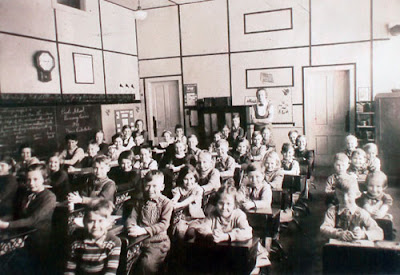 But that is probably not the educational world your students live in. They function each day in a poorly designed factory with inflexible subject divisions, inflexible time periods, and inflexible grade-level-expectations which insist that all learners are moving through all interests - and all skill development - at the same rate. They sit in classrooms which make them uncomfortable, which discourage collaboration, which create and exaggerate "disabilities," which usually prohibit preferred learning tools, and they wait for bells to sound.

Look familiar? Listen, that's not the 21st Century, it is not even the 20th Century. That is a system developed in and created for a 19th Century vision of "Social Darwinism." It is a system based in the supposed needs of the Prussian Empire for industrial workers and compliant soldiers. All the "tools" in use in this "typical" school - age-based grades, discrete subjects, bells signifying periods, the same book in all the students' hands, the chalkboard, the group instruction, the standardized test, were all created between 1800 and 1890 in an attempt to socially engineer society for the second industrial revolution. To 'de-Catholic' British and American society, to build a compliance with industrial shift timetables, to train compliance to authority, and to create failure for most, in order to ensure success for the elite.

And you probably work in a school, or send your children to a school, that is still working toward this bizarre set of goals, while actually arguing over the usefulness of "twenty first century skills."

Change we can believe in

We're not going to change your school overnight. But there are things you can insist on today.

If your school does not have one-to-one computing and wireless networking, insist that students have access to their own devices, and begin collecting used mobile phones and laptops which can be lent to students who lack them.

If your school uses filtering software insist that it block only pornography, not social networking. Students need access to global mentors, and learn to use them.

If your school computers do not use Firefox for web browsing, insist that they install this accessible software with accessibility features - Click-Speak, gTranslate, Dictionary Look-Up, foreign language dictionaries, dictionary switcher, and mapping tools on every computer. A good case can be made that Internet Explorer only schools violate Sections 504 and 508 of the Rehabilitation Act of 1973 (as amended) by failing to make information and communication equally available to all students, and you can suggest that parents, and students, begin to file complaints.

If your school assigns one book to all students, without accessible versions being made available, you can insist that this stop immediately. Your school must belong to Bookshare (free), the Accessible Book Collection (just $49 annually), and must routinely utilize Project Gutenberg, LibriVox, the University of Virginia Library, and other sources to provide accessible texts to all students who need them - or want them.

If your school does not embrace project-based learning, including cross-curricular projects good for credits in multiple subjects, insist that they do. Students function best when their own interests are engaged, and engagement does not come the same way to any two different students.

If your school library is not an open, accessible space, a path to information-on-demand, it is failing to help students prepare for their future, insist that this change immediately.

And if your school is wasting excessive time on 19th Century skills - including handwriting and no-look keyboarding - insist that they stop tomorrow. Students will be far better served by learning effective texting skills than learning how to sign greeting cards or how to copy text into computers - when their own voice can do that.

Those are, of course, just a few suggestions. But the key is that we must stop debating which century we are in, and start functioning as if the time is now.

Thanks for a fabulously practical guide to where we need to head. I don't think you mentioned that your list spends zero dollars.

Increased accountability and transparency would be additional benefits to doing the things you suggest.