I have a good friend who teaches Criminal Justice courses at a university near my home, and sometimes she brings me in to give a "lecture" to her "Police Ethics" course.

I pass some questions out to these 'cops-to-be.' Some of those questions are: "Who is driving faster: the white woman in the minivan doing 85 or the black teen in the Honda doing 75?" "Why shouldn't any African-American male run from the cops, even if they've done nothing wrong?" and "Does a police officer ever have the moral authority to arrest someone for something they themselves have done and gotten away with?" 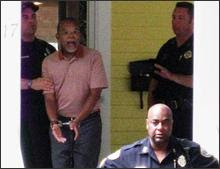 Which brings me to the affair of Dr. Henry Louis Gates, Jr. The Harvard professor arrested on his own front porch by a Cambridge, Massachusetts police officer for "disorderly conduct."

Let me bring in an extended quote from Ralph Richard Banks, the Jackson Eli Reynolds Professor of Law at Stanford Law School in The New York Times - and let me "mark it up" as I might if I was teaching in a Police Academy:

"The officer approached Professor Gates not as a result of a racial profile, but based on a witness’s account of a specific suspect engaged in suspicious behavior, just as we should expect him to. [This is fine, to an extent. "Behavioral profiling" is good police work. Except that there are all sorts of reasons for people to seem "suspicious" around their home. as I cop I would have approached, certainly with caution, but also with the question, "Some neighbors thought you might need help?" This allows the conversation to go in a good direction. "No thanks, just got back from a long trip and the door is stuck, but we've got it now." "Fine, just so I can say I checked when I report back, can I see some ID so I know it's your house?"]

"What happened next illustrates the complicated dynamics of race, crime and policing. Professor Gates would not have been arrested had he been a white Harvard professor, but for reasons that have as much to do with him as with the officer. [This is absolutely true, but it must always be remembered that we should not be giving legal advantage to those "acting white."]

"Did Professor Gates exhausted after his long flight from China and perhaps irritable after being unable to gain entry to his own home, become outraged when he was questioned by Officer Crowley and ordered to step outside? Maybe. Did the police officer overreact to the professor’s outburst? Certainly. Did race shape their responses? Most likely. [If police want to be seen as human, and thus supported by the citizenry, they must understand that we are all human - we all make mistakes, we all do dumb things, we all get frustrated, and we all get angry. Cops need to cut all of us slack in those situations - and if they don't, they should be fired for any minor mistake.]

"The officer, rather than treat Professor Gates as a respected member of the Harvard faculty, probably expected more deference from him because he was black. Professor Gates, in turn, probably offered more defiance because the officer was white. Just as the officer may have presumed that Professor Gates did not belong in the upscale neighborhood, Professor Gates may have presumed that Crowley was a racist, intent on harassing him. [When races come together in the US under conditions of "authority" things are primed to explode. This is the result of the colonial nature of our society. Blacks are no more expected to contradict white police officers in 2009 America than they were in South Africa of 1970. You can watch, with the naked eye, the attitudinal differences between a police officer-white suburbanite interaction and a police officer-black male interaction. This is true even if the police officer is working in the absolute center of American liberalism - Cambridge, Massachusetts - and the black male is a middle-aged Harvard professor called "Skip."]

"There is no question that the officer overreacted. Professor Gates should never have been handcuffed and taken to jail. But if we are to understand not only this disturbing incident but more tragic interactions as well, we need to look beyond the question of racial profiling. We need to appreciate the myriad historical and contemporary factors that too often poison relations between African Americans and law enforcement agencies."

As President Obama said, the police "acted stupidly." As he inferred, the also acted predictably, and therein lies the problem.

Like the business of education, the business of police work is operated as a system of control. Like education, it is designed to enforce certain "norms" - norms which align with White, Protestant, Middle-Income-or-better, Straight, Typically-abled lifestyles. Like education, when people talk about "standards" in police work, they are not the standards of the mass of people being "policed," but the standards of those in power - who wish to remain in power.

As in education, African-American culture is perceived by the "typical" police officer as too loud, too irresponsible, too 'truth-challenged,' too illegitimate to be the basis of any actual "community standard." Just as in the KIPP School theory that black youth must be drilled in white culture, and the Teach for America theory that all minority youth need are white role models, when police bosses talk of "enforcing community standards" they mean the behavior which solidifies the societal structure. When Rudy Giuliani talked about "One City" policing - what he meant was that anyone who wouldn't/couldn't behave like his rich friends on the Upper East Side of Manhattan would be running afoul of the law.

Back to my questions - when I ask, "Why shouldn't any African-American male run from the cops, even if they've done nothing wrong?" it is inevitable. The whites in the room are outraged. They are becoming police officers to save society. They are heroes. They are good people. Why would anyone feel the need to run.

The blacks in the room react differently. Sometimes they just nod. But as one student said one time, "F*** yes, I'd run tonight." Because he knew who makes the rules. And why they make them.

We have three observations about the Harvard professor incident:

1. We find it interesting that the fact that this was the professor's home was evidently not established early on way before the dispute escalated;

2. We find it fascinating that the versions of two members of society, who most would ordinarily view as responsible and honest citizens (this obviously does not include politicians), would vary so dramatically from a factual point of view.

3. Finally, considering that the reading and viewing public were not present at the scene (and thus have no first hand knowledge), and that there is no video tape to our knowledge of the sequence of events and what was said, how so many have formed conclusions, and made assumptions, about who did what and who was wrong.

There are some things which Professor Gates might have considered upon the arrival of the police, no matter how incensed he may have been.

First off, I have am a regular reader of your blog and although I've never posted in the past, I think you raise some original points and present some unique and well-defended arguments (though I don't always agree with them!).

This is admittedly off-topic and I probably should have posted a reply to one of your posts that tackles this issue head-on ...

"Just as in the KIPP School theory that black youth must be drilled in white culture ..."

Maybe you are unfamiliar with the KIPP model. Have you ever observed a KIPP class? I suggest you do so before sweeping such broad brushstrokes. So called "KIPPsters" come to KIPP several grade levels behind their peers from more affluent communities (their "white" peers, mostly). In order to bring them up to grade level and put them in position to attend (and succeed!) at the college or university level, there is a fair amount of set curriculum and, as you say, drilling, that must take place (especially in math class where learning really is hierarchical in the sense that you knowing addition will help you understand multiplication and knowing Algebra I will help you understand Algebra II).

I take for granted that factual knowledge must precede skill and that, therefore, the process of "drilling" is not all bad, so long as it's not overused.
(If it's the drilling aspect that you are having problems with, I would suggest taking a look at this book "Why Don't Students Like School" by Daniel Willingham, a cognitive psychologist from UVA).

Here's my point: you are wrong to imply either that (1) that drilling is some form of base learning reserved only for blacks or minority students and (2) that "white culture" is somehow tantamount to learning the fundamentals of academic subjects such as adding and multiplying.

Inspector - thankfully, there are 911 tapes directly contradicting Sgt. Crowley's account. He knew Gates lived there BEFORE calling for back up. So, he knew no crime was in progress - his presence and actions created the crime.

Mr. Cote - yes, I have observed, I am not criticizing from a point of no investigation - I really prefer to not do that. But most importantly, I do not think mass, rote learning is a path to recovery and independence, and there is no actual evidence that KIPP kids do any better than those of equivalent demographic schools, despite longer hours and student population self-selection (a sure sign of above-average parent commitment). Yes KIPP has its successes, so do Public Schools, but KIPP schools actually demonstrate greater student loss rates than similar public schools, suggesting that success is a minority position.

However, my comments about being drilled in white culture stem from the behaviors expected (and enforced) within the corridors and other non-classroom spaces in KIPP Academies, and the self-reports of African-American KIPP teachers troubled by school curricula which refuse to engage actual AA cultural or political history. I think drill-and-kill is bad for all kids, no matter what color, but a poor education system in KIPP schools is not what I was criticizing here. (I've done that plenty of other places.)