David Brooks tried to write a column about education in today's New York Times. In doing so he made a number of statements which sound right:

"We’ve spent years working on ways to restructure schools, but what matters most is the relationship between one student and one teacher. You ask a kid who has graduated from high school to list the teachers who mattered in his life, and he will reel off names. You ask a kid who dropped out, and he will not even understand the question. Relationships like that are beyond his experience."

But is this right?

David Brooks is part of an American aristocracy which actually hates teachers. He is usually joined in this by the whole New York Times organization, by high profile school bosses like Joel Klein (NYC) and Michelle Rhee (DC), and of course by the Ivy League's darlings - the KIPP and Teach for America organizations. 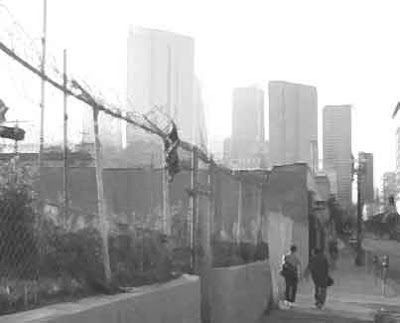 if only the teachers were better...
They hate teachers and they blame teachers. They hate students too, and they blame students as well. If only teachers were better. If only students worked harder. Who escapes blame? Well, the system does. They system which actively opposes child development and human learning patterns. The system which prevents the necessary personalization of learning. The system which strips most teachers of the ability to support their students through an absurd, antiquated system of school organization, through withholding of essential resources, through a focus on the nonsense of standardized testing.

I've got news for you Mr. Brooks: When I was in schools with fundamentally different structures - a "School Without Walls" alternative high school, an ungraded (as in A, B, C) and collaborative university experience, all sorts of people became "great" teachers because they had room to be that. All sorts of students became incredibly hard working, because the work was relevant and appropriate. The simple fact is - it is the system - not the teachers or the students - which is failing.

Of course if David Brooks admitted that, if Joel Klein admitted that, or Michelle Rhee, or Arne Duncan, the responsibility would shift to themselves. And they no more want to held responsible than their friends at Citibank and AIG do.

A paragraph later in his column, Brooks falls off the reform cliff:

What these assessments do - all they do - is eliminate the possibility of real reform. Oh sure, they might measure the ability to take standardized tests based in a specific oppressive world view. And certainly they measure socio-economic status and maybe - within socio-economic class - they might measure a teacher's test prep capabilities. But they say absolutely nothing about actual student progress, about the quality of teachers, or about the quality of schools.

The problem here is that David Brooks is part of the "faux reform" establishment. They talk reform but by ensuring that blame goes on everyone but the causal factors: American poverty, the lack of American social mobility, the lack of properly distributed educational resources in America, and - most importantly - the American structure of education - they ensure that nothing changes and that the elite hold on to their power.

Twitter friend Chris Harkness (@haretek) says, "Let's fight then. We have a smart president now and smart people around him. That gives us at least more of a fighting chance." And she is right. We have this opportunity , and we cannot let only David Brooks and his ilk have the ear of this new president.

my response to Brooks on the Times blog: [an "Editors' Pick"? how remarkable]

I wish you understood anything about "measuring student progress," but unfortunately you continue to embrace an absurd attitude - that standardized tests based in the notion that all children learn at the same rate represent a logical way to gauge human learning. This will lead you to what might be called "CNBC" solutions - merit pay based in short term gains on meaningless assessments - school districts encouraged to lie (as I just read in the NYT) - and an absolute commitment to the 1/3 success rate in US education which maintains the social status quo.

Real education reform would begin with a fundamental re-thinking of our industrial model based in age-based grades and "objective" testing. http://speedchange.blogspot.com...
The UK is embracing "personalised learning" and cutting testing of younger students, strategies based in the kind of authentic educational research which the US has refused to fund in its fraudulent commitment to some "gold standard" "medical model" of research.

Let us hope that those of us who favor actual reform, those of us who want to give teachers the tools and resources they need, those of us who believe that students are individuals, get some kind of hearing in this process, and that the debate is not hijacked by the Joel Kleins and Michelle Rhees of the world.

That NCLB part made me want to scream. I wonder what his reaction to the Howard Gardner et.al. piece about the future of learning. http://www.mitpressjournals.org/doi/full/10.1162/ijlm.2009.0005

The cluelessness amazes me at times.

I, too, was upset by the NCLB comment. Data can be so misleading, especially if it is manipulated, skewed by various factors, or interpreted in a way that deliberately supports a particular view, thus becoming biased. How about being more results driven rather than data driven? How about letting me, the professional educator, decide what works and run with it instead of you, the professional politician, telling me what to do based on some data that does not truly represent my current classroom? Thanks for nothing, Washington.

David Brooks is typical of the "policy maker class" - these are wealthy people for whom "the world as it is has worked" - so their "classical liberalism" (whether Americans call that "liberalism" or "conservatism") is always based in "doing more of the same," or "doing the same better."

Fundamental change, change which might truly empower others, scares them to death, because, obviously, that would threaten their position.

So the embrace of testing and "grade level expectations" is perfect for them. They get to sound like "reformers" while ensuring that those "unlike themselves" are properly 'filtered out' and consigned to the permanent underclass.

i agree we have to look at systemic change. i disagree that the david brooks's of the world are scared such change would threaten their position. unlike you, i know quite a few ivy league folks. you get the same mix of a holes to saints you get in any class of society. ivy leaguers are just usually more ambitious a-holes or saints or anything in between. just a prejudice can spring from ignorance or maliciousness, so can a person's prejudice against change in the educational system. most policy people just don't know. they aren't evil as you are preoccupied at portraying them.