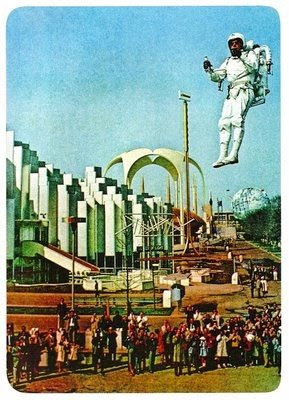 And yesterday a friend reminded me of an article I'd seen recently in The Atlantic - FutureSchlock - the sad tale of the dimishment of Disneyland's House of the Future. We have gone, P.J. O'Rourke writes, from breakthroughs in how we live to apparently just wanting very large digital photo frames.

And the day before I listened to one of my colleagues bemoan how computers are typically used in schools - when they are used at all - as typewriters or as the home of math games both less educational and less fun than a good round of Racko.

I said to my friend, "We used to have bigger dreams." We did. The world of the 1950s and 1960s was a mess, there's no doubt about it. Brutal to people and the planet. But within that disaster people imagined real change. Not just flying cars, but world peace. Not just PicturePhone but agricultural revolutions. Not just supersonic planes and flights to the moon, but living, studying, and farming beneath the sea.

Big dreams matter. Without them we do not have a future to pursue. Only a past. And since that past is not only non-reclaimable, it was never as nice as we remember anyway, that's a sad strategy.

Education has seen the same failure of imagination. Where we once saw the wildest hopes - Schools Without Walls, Hampshire College, Summerhill, even a basic small state campus like Grand Valley State in Michigan could be built around learning style choice and the newest "on-demand" technologies (classes could be watched in individual video cubicles, among other things): "The period between 1967 and 1972, especially, was a time of crisis for public education, when student demonstrations, teacher strikes, and a deep questioning of traditional assumptions shook the system to its core. In these few years alone, over 500 "free schools"--nonpublic schools based on countercultural if not revolutionary ideas--were founded. Open classrooms and magnet schools (public schools of choice) were introduced. And the spirit of Rousseau, Pestalozzi and Froebel began to seep into academic and professional circles, leading, by the end of the 1970's, to approaches that came to be called "humanistic" and "holistic" education." (Ron Miller)


We imagined education which looked as different from what we knew as the 'life undersea' visions of the 1964 General Motors Futurama was from life in our suburban tract homes. We understood that doing the same things - again - would not get us where we wanted to go: to peace, to an end of poverty, to an end of hunger, to a world of justice and opportunity.

In technology, many of our dreams have come true. They were big dreams, and we pursued them. We now carry mobile phones that essentially work the way the communication devices did in Douglas Adams' Hitchhikers Guide to the Galaxy. Our cars can talk to us and envelop us in air bags in a crash. We have video phones - and for free. "Everyone" has the world's greatest library available in their home, or in their pocket. Agriculture has transformed the world's food supply.

But in schools, we go backwards. We even declare it, saying, we're going "back"wards "to basics." When we let a few new things trickle in, we control them so fiercely that they change almost nothing. Rather than tearing down classroom walls our kids now spend more time in school and even take fewer field trips. Rather than alternative evaluations we now have standardized tests for all ages. Rather than project-based learning we now have Core Curriculum. Rather than social justice we have "zero tolerance."

We've stopped dreaming - unless we are dreaming of the Eisenhower Administration and pretending it was all things I am quite certain it was not. And since we've stopped dreaming, we've stopped progressing. We're so afraid these days. I never understood how Europeans just 'gave up on progress' when the Roman Empire fell, but now I do. We have done the same. Retreated to our dark, isolated classrooms, hiding from the world, hoping it all goes away.

It is time to stop hiding and start dreaming. It is time to reject what we are doing now: hell, that's easy, we know it does not work. And it is time to reject all the "tinkering around the edges" which wastes our energy and accomplishes nothing. We have to say no to everything that is not sufficiently transformative, which does not change what education is, and put all of our energies into ideas which will transform.

I thought of building a little Futurama here: Great examples of great education, from The College of the Atlantic to Lisa Parisi's Classroom. Those are fabulous to see, but that's not what we need, we need to go further, we need to go to the ends of our imagination.

That's just a start, just to get us imagining. And that is where to start, because I have learned that if we can dream it, we can make it. When I told Charles Chen that I needed an easy version of FireVox with no more than three buttons, he had CLiCk-Speak built ten months later. When a bunch of us said we needed a context-based, interactive SpellChecker, Ofer Chermesh and his Ghotit team created one. When I told my son we needed a simple Twitter-like system for the classroom, he gave me Today'sMeet six weeks later.

Those are tiny dreams, but they are proof of what we can do.

This isn't all about technology - but then again it is. It is about using the technologies that we have and that we will have to break the boundaries, to smash the walls, to build the connections, to liberate. It is about tossing out the 1840s-designed schoolhouse and classroom, and dreaming an educational structure which works for everyone.

So this holiday season make this your resolution: Dream. Dream Big. And reject the "insufficiently transformative." We need to put our energy behind the things which will make a difference.

i asked my 13 year old what her favorite classes were and she said they were all about the same: boring. so i said ok let's home school you for high school then. you can be outside a school making money or learning something. but she wanted to stay with her middle school peers into high school even if it means being bored. she wants to interact with her friends. they do some collaborative stuff together after school, like making short movies and posting to youtube, and she's starting to get interested in the drums...but it's like the school is like the army. it's a uniting/bonding influence they can all gripe about or something. anyway, middle school is the height of wanting to conform, so maybe she'll come out of this haze by high school age.ps i posted a comment in the rhee section, but it became vapor apparently. did you see it?

there are a lot of sites where you type in text in one language and get a rough translation of another language in seconds. so why not have a program where you speak in your language and get a rough text translation into another language. some of my immigrant students can not write/write well in their native languages. it would be nice to have a hand held device that you could speak into say in haitian creole and get a rough translation of english in text form. students could use it more to start immediately communicating with peers who don't speak their language. teachers are in such a rush in the secondary schools, it would be of limited use student to teacher cuz it would take too much time going back and forth.

Ira,
Once again you nail it by not only bemoaning the current lack of vision in our schools but offering alternatives and possibilities.
DREAM BIG. But don't stop at the dream, stop when the dream is fulfilled.
I have to delicious this and come back to your recommended reading over Christmas vacation.

Ira,
Thank you for thinking that our classroom is the future. If only it were so. It will be when the rest of the district/state/country/world comes on board. Then there will not be obstacles such as NCLB, curriculum that is impossible to get through in a year, and a focus on test scores instead of children. Until then, I dream. And I never accept the status quo. It is the mantra of our classroom. Good enough never is.

Incidentally, I've been reading The Modern School Movement: Anarchism and Education in the United States, which is a very interesting review of radical schools from the first half of the 20th century.