"The people up there said it was fascinating meeting you," she said. "Yeah?" I asked. "They said you suggested all kinds of things that they'd never thought of." "They're not good at looking." "No," she said, "they just don't know." "No, I guess they don't."

"Anyway," she continued, "one of them asked..." Her voice trailed off. Then she changed the subject. "What did one of them ask?" I asked.

"You have many cutting edge provocative ideas. However, I am saddened that you could not find a way to express yourself without using offensive vocabulary. I believe you need to know how to effectively speak without hurting others and reinforcing myths and stereotypes. Please read Kathie Snow's article on People First Language, which can be found on her Disability is Natural website at www.disabilityisnatural.com. Thank you." - Anne Eason commenting on my May Day: Retard Theory post. 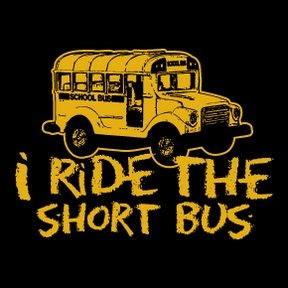 I told Anne that I didn't want to use "people first" language, which has always sounded 'diagnostic' to me. I'm not a "person with dyslexia" or whatever other 'diseases' certain powers that be decide that I have. When I get sick in winter I might be a "person with the flu." I have been, for example, "the patient with the severe allergic reaction." But my dyslexia, my attention 'issues,' whatever - those are not maladies that I "have." Those are identities which society has given me by declaring that I am not like them. So, just as I would not be "a person with Irishness," or perhaps, "a person with blackness (Africanness?)," I am not "a person with a disability." These terms are identity descriptors, existing because white, Protestant, male, heterosexual, normal people do not want to share their identity with me. So, if that label is so important to them, I will put that label first, thank you. Their slur becomes my badge of honor.

"[W]hat you are actually doing is perpetuating use of the word and presenting it as being OK for others to call you that since you are calling yourself "retard". It is not OK. It has been and continues to be a long hard battle to stop the use of this word. The people that want it stopped are the people who have been labeled and teased, the people who love them and the people who know it is wrong to talk to people like that. I understand where you are coming from, but what you are actually doing is perpetuating the use of the word toward the very people you want to stop labeling. I think that experience, which will come with time, will change your thinking." - anonymous commenting on my May Day: Retard Theory post.

I told anonymous that experience had brought me right to where I am now. I told her that I thought "Retard Theory" was as important an idea as "Queer Theory" and "Crip Theory." That the use of "that kind" of term was just as important. Of course, commenting on the same post Dave Hingsburger said, "Maybe this argument would work if the word applied to 'you' then it would have more power. Crip theory is often used by those with physical disabilities. 'Retard' refers to a specific population, I am guessing it's a population to which you do not belong. You cannot claim use of this word - it ain't yours." But damn, even if Dave doesn't want me to have the word, even if I wouldn't generally be described as having an "intellectual disability," or a "cognitive impairment" or whatever of those diseases people want to embrace, well... Dave, people don't say, "you can't read," to make fun of people like me and they don't say, "you can't sit still in class," and they don't say, "you have trouble with the rules of human interaction." They say, "retard." And they mean it.

Words have power, we either choose to own them or we choose not to.

"It has been and continues to be a long hard battle to stop the use of this word. The people that want it stopped are the people who have been labeled and teased, the people who love them and the people who know it is wrong to talk to people like that." anonymous said. But the word, well, there are lots of words...

'"All the other children at my school are stupid. Ex­cept I'm not meant to call them stupid, even though this is what, they are. I'm meant to say that they have learning difficulties or that they have special needs. But this is stupid because everyone has learning difficulties because learning to speak French or un­derstanding relativity is difficult and also everyone has special needs, like Father, who has to carry a little packet of artificial sweetening tablets around with him to put in his coffee to stop him from getting fat, or Mrs. Peters, who wears a beige-colored hearing aid, or Siobhan, who has glasses so thick that they give you a headache if you borrow them, and none of these people are Special Needs, even if they have special needs.

'"But Siobhan said we have to use those words because peo­ple used to call children like the children at school spaz and crip and mong, which were nasty words. But that is stupid too because sometimes the children from the school down the road see us in the street when we're getting off the bus and they shout, "Spe­cial Needs! Special Needs!" But I don't take any notice because I don't listen to what other people say and only sticks and stones can break my bones and I have my Swiss Army knife if they hit me and if I kill them it will be self-defense and I won't go to prison."' - Mark Haddon. The Curious Incident of the Dog in the Night-time (2003. pp 43-44)

Here's the thing, for Anne, and Dave, and Anon, and anyone else who came through that post, objected, but didn't comment. If what you are fighting is "the word" all you will accomplish - if you win - is that the kids will "shout, "Spe­cial Needs! Special Needs!"' instead. And then, just as with "colored" and "negro" in US race relations, you'll have to unteach your new words. 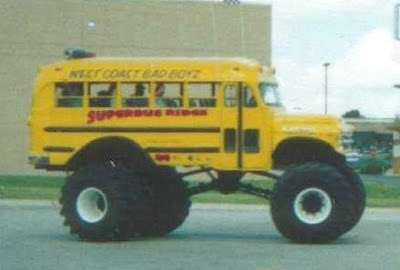 That doesn't mean I want you to stop trying to get people to stop using "retard" that way, just as clearly identified gay activist groups would sure rather people stopped using, "that's so gay" as a general insult. But I do mean that if you accept the way "disability" is defined, if you accept the "medical model of disability," if you accept that diagnosis leads to accommodation rather than the idea that individual human rights leads to choices - If you participate in those systems without fighting them every day - your efforts regarding the word are worthless, because while you might change the word, you won't change the idea.

As for me, I want to take the word and "queer" it, as I want to take the idea of "normal" and queer that. As I want to use language, use argument, use action to make people doubt what they know - everything they know - about the ideas of disability and difference and human norms. It's this idea, taking the short bus and making it into a monster truck and using it to break down the walls.

Yes, words matter, and words can insult and hurt. And words can also have remarkable power when we own them, when we use them in ways our enemies don't expect, or in ways which teach new ways of seeing.

So, Dave, maybe I don't "qualify" by your diagnostic standards, or maybe I do, as some who've met me think. But I not only don't care what side of which of your arbitrary lines I lie on, I don't think the lines are real at all. I think the lines are your problem, and shouldn't be mine or anyone else's. And if upsetting a few people with a few words will help get people to listen to that argument, I'll use those words.

"I'm not following a plan written by a retard undergrad," the reported statement of a university administrator at one of my undergraduate institutions, responding to a "non-diagnostic" campus accessibility plan I had written.

Late addition: two other opinions on language and disability
From Diary of a Goldfish: The Language of Disability
From Wheelchair Dancer: On Making Argument: Disability and Language

I'm afraid I didn't mention the Language Amnesty in the main Blogging Against Disablism Day post on May 1st. Every year I ask everyone to cut one another slack regarding language; to have discussion on language but allow people to describe themselves however they wish. This year I even wrote a guide to The Language of Disability to explain some of the differences of opinion; including the rejection of people first language and the reclamation of derogatory terms.

However, I didn't then mention it on the day and I feel I owe you an apology. Not that your commenters necessarily visited my site (well Dave did), but if they had and I had emphasised the Amnesty, they may have respected the way in which you chose to talk about your own experiences.

No apologies necessary at all. The conversation has been worth having.

Quoth: ""I'm not following a plan written by a retard undergrad," the reported statement of a university administrator at one of my undergraduate institutions, responding to a "non-diagnostic" campus accessibility plan I had written."

I was so impacted by your BADD post that I wrote the following blog - hoping to send some of my peers to read what you had written: The destructive force of 'Normal'
Far from troubled by your use of the word Retard - your work troubled my thoughts as an educator about accomidations and the pathologizing practices of special education.