From Futurelab... teaching students to build games for mobiles that teach physics - Newtoons.

Years ago... fifteen years ago, I heard a member of the New York State Board of Regents (the main policy group for all education in New York) talk about how "we do education backwards." "Every five-year-old comes to school ready to learn physics and geometry and storytelling," he said, "but we force them into symbolic language instead. Then, when they're really ready for symbolic language, we force them into really boring physics classes." 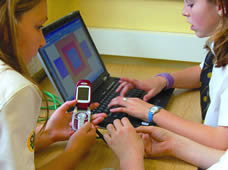 I thought of this listening to Futurelab's J. Pykett this morning. Physics is fun, or it should be. Gaming/Etertainment, often used to show a "defiance of physics" - think Star Wars - can also do the opposite - think Stanley Kubrik's 2001 - that is, reinforce it.

Plus the idea of somewhat older students designing engaging "teaching" games for somewhat younger students taps into all we know about good cognitive learning - the best way to learn something is to teach it. And teaching it via handheld gaming promotes efficiency and clarity.

Oh, but schools in the US think mobile phones are dangerous...

Hi Ira, Just checking in on your blog from a session at CAL. Thanks for giving me your card at lunchtime.
Rebecca

a good text. Thanks for article and share. very good text.