"It didn't take me very long after I started teaching to become aware (nobody at [Teachers College] ever helped me to become aware) that there were plenty of students who could learn, but not necessarily what I wanted them to learn and how I wanted them to learn it, that there were cultural differences that I didn't understand but needed to and then figure out what to do with those new understandings--not a simple matter in the 19th century schoolroom."

I was really, really lucky as a student. I had one of those "best five teachers in the country" step into my life in adolescence. And though that didn't make things easy - it is many, many years later and I still hate school and know that, for me as for probably a large majority of all students, it is the wrong way to try to study things - he did give me the space and time to start to figure out what my learning process was, and what kind of environments supported that process.

I think of him as a life-saver in many ways. Without him there would probably have never even been a high school diploma, and that would have limited many possibilities.

So when he recently emailed me the statement above, I did a lot of thinking about it. And I reflected on the ways we still discuss education, and why we cannot ever seem to come up with a structure for education in the United States which works for more than one third of the students.

Then I read this joke from Barry Bachenheimer, commenting on Karen Janowski's blog:

The friend then says "I thought you said you taught your dog to sing "Twinkle Twinkle Little Star"?" 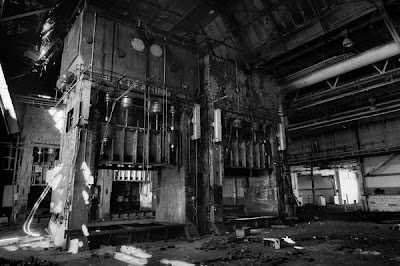 Here's the thing - there are lots of metaphors for the way education is perceived in the US, and they are all pretty accurate. 1. Education follows the "Industrial Model," and has since the late 19th Century and (at least) the Committee of Ten report. Education is roughly akin to a stamping plant. Raw material enters at kindergarten, perceived as essentially all the same. Repeated applications of pressure steadily transform this raw material into a value-added product which can be used in an industrial economy. If one piece of raw material fails to properly transform it is because it is inherently flawed (disabled or "bad") and it is plucked from the assembly line and dumped in the reject bin. 2. Education follows the "Missionary Model," and has at least since the Puritans began "public" schooling around Massachusetts Bay in the 17th Century. "The Church" (Society) sends out "missionaries" (teachers) to convert the "heathens" (children) into good, solid, obedient, Christian, white 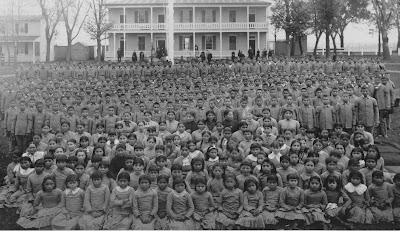 people who will work consistently and not trouble society. If the conversion fails to take it is because the heathen (child) was born on the wrong side of John Calvin's pre-destination divide. In this case "separation from the body of the church" is the best solution. 3. Education is "Political Indoctrination," not really any different in the US than it might be in Cuba or was in the old Soviet Union. The purpose of education is the creation of loyal, compliant citizens who will fill the roles in society which must be filled. Learning to follow instructions and a schedule, learning to pledge allegiance and respect authority, learning to sit down and shut up are not some "hidden curriculum," this is the curriculum. If a student fails to comfortably assume these compliant qualities it is because they are criminals, and must be treated as such. 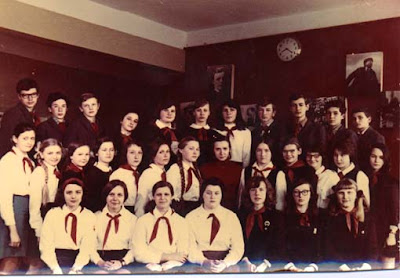 And with each of these models - all of which we can directly see represented in national policies such as No Child Left Behind and in the research theories embraced by the American Educational Research Association - comes the idea of education as a "delivery system." Education - curriculum - will be "delivered" to students. If there is a failure in the delivery, it is the failure of the recipient first and foremost - they were not home for the delivery, or were not ready for it, or were unprepared to bring it into their house. Or, to a lesser extent, it might be a failure of the delivery "person." They didn't ring the doorbell enough, or did not knock loudly enough, or they were too slow doing other things and didn't have enough time for their whole route. Either way, of course, no one actually questions what is being delivered, or to whom. The only thing at issue is the process.

On Alice Mercer's blog she is asking "What do they need?" And that is the unasked question. Because Americans think lots of people are the "customer" in the educational process - the society, the business community, the economy itself, maybe even the parents - but they almost always fail to identify the actual customer: the student.

And it is only by identifying the student as the customer that education can be changed. What does the student need? How can what the student needs be offered, most effectively, to that student? When does the student need what they need? It is those questions which will shift the problem from the student, and to a significant extent, the teacher, and put it where it belongs, on the very system, on the very conception of education as we know it. After all, empowered students and empowered teachers could work wonderfully together if they had both the freedom and the resources they needed to work together effectively as collaborators. That relationship would not demean the teacher at all - it makes the teacher the professional expert of incalculable value. And it would not demean the student - who becomes an active participant in learning and actively responsible for learning.

To go back to the top, my old teacher said, "there were plenty of students who could learn, but not necessarily what I wanted them to learn and how I wanted them to learn it." That teacher decided that the system was at fault, not the student. And he worked tirelessly to create an alternative to that system - which he eventually did. An alternative that, as I said, I still consider a "life-saver." But all around us the blame when students can't or do not want to learn what we want them to, as we want them to, when we want them to, falls on the students, and on the teachers caught in the middle.

So change who you think the customer is, and you may get the change you need.

Alan Shapiro (that "one of the five best teachers") on Education:
History: The Disenchanting Instrument of Recall
The Plagiarism Perplex
Teaching and Critical Thinking
The Essential Skill of Crap-Detecting
Teaching on Controversial Issues
Thinking Critically About Internet Resources
How to Stop Cheaters

The word that comes after 'customer' is 'service,' which many find difficult to consider as their job.

It's not an either/or question between delivery and customer. The delivery system determines the end of education: church = salvation; state = good citizen; business = employee who adds value. The most important of these is the state delivery system, and that entity's goal is citizenship. Good. But the problem is that the state, right now, is trying to create employees who add value to the economy. We just CAN'T do that and not suffer the consequences. We need an informed electorate to come from our schools, whether we want that to be K-12 or K-16. Let all the corporations mold the good citizens into good workers later.

On the religion question, well, there is overlap. For instance, Evangelicals want their children to learn to read the Bible well. Reading is a skill that also helps with citizenship, state-funded institutions must teach their charges how to apply critical reading to state/legislation matters.

I'm adding installment two even as I send this, and reference this post. Two things I've noticed being on my school's student study teams (SST, CST, etc.) children with "problems" are discussed, even parents who have failed in this system themselves and know the system didn't work, buy into it. The one thing that this system of education seems to successfully teach people is what school should be like.

Next, at a recent SST meeting, a teacher was asked to describe a student, and said he was very interested in topics that he liked, and knew a lot about them. So I said, "He likes to learn about topics he's interested in." The teacher said, "No, he doesn't want to learn, he doesn't want to learn to read, he is just interested in this stuff." This stuff was animals, and science. I gently pointed out that this was learning, not just stuff, it just wasn't what she wanted to teach. Now, I think she is right in that he does need to read. He is getting frustrated with that learning, and that will only get worse as he gets older and farther behind, but she also needs to find a way to harness that interest in learning that he is showing in topics he likes. I think this illustrates how we compartmentalize what is not a separate process for young children.