"Not to present a romanticized view," Richard Altenbaugh writes in The American People and Their Education: A Social History

, "but preindustrial work moved at a very distinct pace and maintained a different culture than industrial labor." 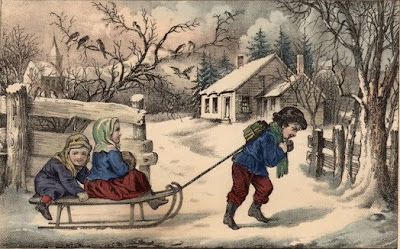 In the 20 years before the American Civil War, education's purpose and design changed in the United States as the economy changed. Without ascribing any utopian ideal to that "preindustrial" world Altenbaugh describes, we can clearly say that time and patterns of work followed something which might be described as "natural" directives. Workers had things to do, obviously, but when and how they were done represented individual - or family - responses to the world as it existed that moment.
Describing Lynn, Massachusetts - the shoe manufacturing capitol of the US in the early 19th Century - Alan Dawley wrote in 1976 (quoted and paraphrased by Altenbaugh 1979 p. 70), "Women decided when to boil tallow for candles, when to darn socks, and when to bind shoes. Men chose when to repair the front stoop, when to manure the garden, and when to bottom shoes. Running errands, a boy exploited this time to play games with friends. Work paused for relaxed meals, or when customers or visitors stopped, or simply to pass the time gossiping or debating politics."
"Because of task-oriented work, there was no standard length to the workday or workweek," Altenbaugh continues, relying on social-historian E. P. Thompson (1967). "The duration of work depended on the completion of the task. Such irregular work rhythms caused bouts of leisure to be followed by frenetic periods of labor. And no sharp demarcation existed between work and social intercourse."
And, naturally, the same social structure extended to education. Students came to school when they could (or would), after necessary family chores were finished, when the weather allowed, when the manufacture or farming schedule allowed. All students shared one classroom, there were no subject divisions or separation between skill building and content. This extended from the schooling for the youngest all the way up. Reading a biography of Alexander Hamilton

, I was struck by the complete informality of his experience at Kings College (now Columbia University) in New York - no real classes, no specific reading requirements, a fully individualized course of study which would be virtually unknown today even in American doctoral programs.
And yes, students entered the classroom wherever they "were" and worked forward. Since the Prussian/Pietist concept of age-based grades had yet to be transplanted to the "New World" there were, as yet, nothing like grade-based curricula or grade-based expectations. 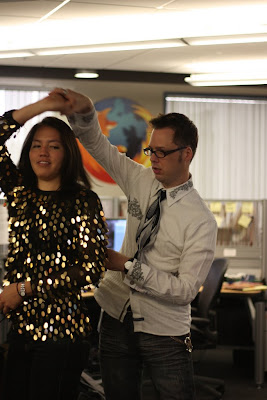 thanks to James Socol for the image
Which brings us, momentarily, to today. After 150 or so years of life within the "Second Industrial Revolution," work in America has changed radically. Jobs in the United States, and in Europe, and Australia, etc, are, today, largely of two types: Service and Creative. Both of these job types require very high degrees of flexibility (both time and job task), collaboration, independence, observation, and multi-tasking. As the waiter must scan the room effectively, and support co-workers, and extend tasks based on conditions, the creative worker (see Mozilla Corporation headquarters above "no sharp demarcation existed between work and social intercourse") must flip between individual and group work constantly, keep track of multiple elements, and operate in a purely task oriented environment. These skillsets have far more to do with the lifestyle of the preindustrial society than they do with that of the Ford Assembly Line worker of 1920. Even within "industry" the demands have changed. In 1960 the GM worker bolted the rear bumper onto the Buick and paid no attention if the tail pipe - installed "up the line" - was falling off. Now, that kind of "single-tasking" is completely unacceptable.

Yet our schools remain firmly about training those 1920 Ford workers or 1960 GM workers. Oh, yes, many schools are trying - and fighting the Obama Administration - to include collaboration and creativity, but that is within the "specified" curriculum. The far more important "Hidden Curriculum" and the entire so-called "reform movement" (of Gates, Duncan, Rhee, Vallas, Klein, et al) is devoted to education as a system of manufacturing industrial workers. ("The hidden curriculum is no hidden at all, it is the curriculum," Lynn Fendler)

Let's drop back in time again, to the days of New England mill owners trying to get workers trained in the concepts of work shifts and specific time schedules. Where did they turn for this training? To the nascent "common school" of Henry Barnard. Barnard could be blunt: "The primary object in securing the early school attendance of children, is not so much their intellectual culture, as the regulation of the feelings and dispositions." The function of the form being created for schools was not to enhance education, it was to enhance conformity and submission to the emerging industrial culture.

"As a result, apprenticeship and generalized vocational choice transmitted through family lines gradually were replaced by formal schooling and vocationally oriented training to better accommodate the realities of an industrial job market. Inevitably, schools took on the task- especially the burden of socializing the nation's youth for entry into the workforce. How the individual functioned within the schooling process- attendance, grades, and graduation - became the primary means of determining preparedness for work" (Jacobs and Phillips 1979).


So, we expect students to be "on time" not because it is educationally important - in an individualized education program why would it be? - but because we are training workers to be on time. We create "standards" for each grade level not because it is educationally important - why is it important to study American History and Central European History at age 13? - but because we are teaching single-tasking and work conformity. We test individually, blocking collaboration (which we call "cheating") not because it is educationally important - why wouldn't we ask the humans around us to share their knowledge? - but because we are manufacturing workers for that assembly line.
While people worry about testing averages, about whether schools should be run as public goods or for corporate profit, about the number of school days, about what topics to emphasize, the real question, as the 21st Century rolls on, needs to be the very designed structure of our schools. They were created by a certain kind of society for a certain kind of economic reality. Whether that was ever good or bad is a question for another time, but for today I believe we need to begin to return our schools back to the "natural humanity" of the time before the assembly line began to rule our lives.
- Ira Socol
Posted by Unknown at 6/20/2010 12:07:00 PM

Hey Ira, after reading your column, I was reminded of another essay I just read this morning. This essay, by a retired public school teacher, argues that compulsory education is bad, and in it he talks about how our model of schooling is imported from the old Prussian Empire.

Anyway, I don't know if I completely agree with it, and I'm not sure you will either, but I think you should check it out and let me know what you think. Here's the link: How Public Education Cripples Our Kids by John Taylor Grotto. This originally appeared in the Sept. 2003 edition of Harper's Magazine

One of the benefits of learning online is the ability to mix work and social. In fact, much of what I have learned over the past few years come from the social interactions.

As long as schools serve the public interest (regardless of the benefits to the actual students) we will continue to see them carry on as they have in the past. It is a hard argument to make that students don't need to learn to be on time or have a shared knowledge base. Those arguments make people very uncomfortable.

On the other hand, there are too many successful people today that state school was more of a prison than a playground and their learning started when school stopped to ignore that schools don't work for many if not most of us.

We must be on the same wavelength or something this week. Your post is a perfect followup to a post I made last Thursday: The Real Disruptive Innovation.

This is a very interesting post, but I'm doing 8 other things at the moment so I'm a little distracted :P

I'll come back and re-read it when I have more time :)