Social Change and the American School

With the NECC Conference running in Washington, I've been inundated with thoughts on Twitter. But this morning a couple of things ran together. UrbanEducation sent me a question: "@ShaySzu I teach in an urban school [without] much technology. How do you use technology in your classrooms without breaking the bank?" Then Greg Casperson, a colleague at MSU said, "Arguments for public online schools dismiss issues of working families that rely on schools for places of learning and child rearing." Asked regarding the question of "bricks and mortar" schools v online learning.

And once again I thought, "Damn, the United States is one very weird nation."

Americans really do not believe in their government as competent or capable. It is not just that they've elected anti-government capitalists to the Presidency, Governorships, positions in Congress consistently over the past generation+ - America's election system is so flawed and antiquated that this could mean almost anything. Rather, it is a deep seated set of beliefs - "Well, I wouldn't really want just a government health insurance system." "I'm not sure the government is the best group to try to run - the trains, the power system, the universities, whatever." It is a belief that government in the United States is clearly less competent than that of most other "developed" nations - France, the UK, Canada, Germany, Italy...

But then we get to schools. Schools, we believe, can do everything.

I've seen many tweets, for example, spreading the "gospel" that only education can solve poverty. I find this odd because if there is one overwhelming predictor of school failure in the US, it is poverty.

But we expect it. As Greg points out, people depend on schools to feed their children, to control their children, to babysit their children so American parents can work longer hours than almost anyone. We even expect our schools to provide athletic recreation and sport training. In other words, we've invested most of the American social safety net in one poorly funded set of government institutions, and insisted that they solve all of our problems.

And when this absurd plan inevitably fails, we blame our teachers, our administrators, our parents, our students, and often, we begin to argue that only privatization can solve this.

And now we bring the next issue into play: Schools must solve the digital divide. They must reinvigorate American creativity as well. All righty then.

I want to take you back in time for a minute, to the United States at the turn of the 20th Century. 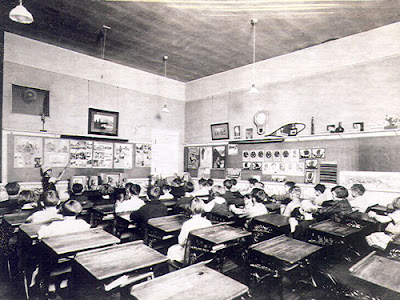 At this point in history the US had an almost unparalleled wealth divide. It was filled with students from non-English speaking homes. Communications technology was changing rapidly - people were getting their information from films, and from a vast collection of new and unreliable newspapers. Too many parents of impoverished children were both working long hours. Schools were physically in no condition to handle the flood of students. There was insufficient teacher training.

There was a vast response to this at the time. No, very unfortunately, nothing changed the basic pedagogical or physical forms of the classroom that had been established a half century before, that was the missed opportunity, but let's look at what was tried:Now, what are we doing today?
The problems plaguing American society are very deep. These problems stem from a mix of an awful economic system (which leaves tens of millions in poverty), an awful health care system (which strangles innovation by making business start ups prohibitively risky and expensive for most), a bizarre education funding system (which gives the most money to the wealthiest students), incoherent transportation and communications policies (which blocks movement of people to jobs and information to students), and a completely antiquated government system (modeled on 18th Century Britain).

So schools can be a part of this solution - if properly funded and supported, but they cannot be the solution. Without the other changes, the change in education will have just minimal impact.

However, let me get back to Greg Casperson and Shayna Szumach. I'm going to suggest two paradigm switches, one as to what a "learning place" means and the other as to what "educational technology" means.

For Greg, I want schools open 24/7. I want their libraries, their gyms, their auditoriums, their computers open round the clock. It baffles me that I can buy liquor, or marijuana for that matter, almost anytime in most American cities but getting into a library is much more doubtful. In the town I live now, and this is not unusual, the library is open less when students are out of school during the summer!

Schools need to be learning places that are the heart of every community in America, offering adult ed in the evenings, community ed, yes of course, but mostly offering access to information, ideas, knowledge, and socialization.

And so, perhaps, kids should be attending school on flexible schedules as well. Why is education the last "fixed time" service in America? Why can't high school schedules, even primary school schedules, look more like those in universities?

For Shayna, well, technology surrounds you. I can link you to the ideas of used computers (or cheap netbooks) and free software, or I can suggest that most kids carry great tech tools in their pockets - maybe the solution is Blackberries for all? (costly, but still cheaper than what most schools throw away on bad networks and hardware.) I can tell you that schools buy the most expensive solutions (from Apple computers to Clickers to Kurzweil3000) for everything when cheaper is often better. I can ask if your school still pays for an email system when Google Apps for Education is free?

But mostly I can tell you that you need to start where you can. One good tablet PC with a mobile internet card can light up your classroom even with zero building tech support. Polleverywhere can turn any group of cell-phone toting American kids into an interactive classroom experience. A bunch of downloadable and online software, from Firefox with Click-Speak and gTranslate to Ghotit, to WordTalk to Google Earth to Diigo, will make those couple of classroom computers into universal design workstations.

But I'll repeat. We can make schools better, but schools will not fix American society. And individuals crying in the dark won't fix it either. Americans, as a group, must start to believe that they, through their own government, can improve life in these United States.

And in the hope that will happen, schools need to get better as best they can, so they can ride that new wave.

Excellent post Ira. I agree we need to open up school and make it more available both physically and online. My biggest gripe when people try to reform schools is that they only look at fixing the "education" piece and forget all the roles schools have took on.

I don't believe we should be in all these rolls and need to return a lot of ownership of child upbringing/learning back to parents and the community. However, this is a huge social issue and needs to be addressed and not just waved away in some move to turn schools into online learning place utopias that many edtech enthusiasts seem to think will solve our youth's social learning crisis.

I think you said it best at the end:

"We can make schools better, but schools will not fix American society. And individuals crying in the dark won't fix it either. Americans, as a group, must start to believe that they, through their own government, can improve life in these United States."

I tweeted a summary, wrote my own post inspired by yours (http://human.edublogs.org/2009/07/01/edu-panacea/) so I won't labour much further.

Yes. Confusion and edu-trivia is fogging the view.

I read some of the stuff that is coming out of NECC (eg. the 'great debates') and most of it is I have to say an awful lot of recycled edu-babble and technicalities.

Don't get me wrong, I would love to be there but probably for the beers with people after the 'great talkers' and edu-powers-that-be have finished showing off their wares.

As long as we teachers see ourselves as merely 'educators' we will remain confined to the classrooms of yesteryear (oh, maybe they'll throw a couple of computers there and call it 'modern'). We are cultural workers and ones with a great deal of responsibility to stop and think a little (or a lot).

As said over Twitter, I look forward to sharing a few beers one day either in Oz, US or somewhere else in this wonderfully crazy world of ours.

Thanks for the inspiration mate, best wishes.

For one thing I agree with Tomaz - this is a crazy world - and also crazy times for education and schools. But it is also of a large window of opportunities. That is why I am so motivated by the debate.

Good ideias and suggestions. And what is most important (I think) we should go after resources that are free of charge and open source. It will make a great difference - for sure.

But still remains in the heart of the matter the human side. We have to prepare and challenge teachers and educators alike to come into the revolution boat!

Interesting coincidence: You post this, and then Facing South 'blog reports on the Free Minds Free People conference. Interesting pullquotes like this:

"Cobb, a visiting professor of African Studies at Brown University, began by making a connection to another moment in U.S. history 50 years earlier -- the Civil Rights Movement. The first step needed then, he said, was to shed the mental obstacle of fear. He set the tone for the rest of the conference by focusing on developing education as a tool for building social justice. He also made a case for grounding current work in history: Since educating slaves was illegal in the South, education went underground, he said; as a result, when slavery ended black Southerners already had hundreds of schools in place, helping pave the way for the modern public education system."