Bloomsday and the value of alternative paths

Is it the greatest novel written in English? That's open to debate, of course, but there is no doubt that James Joyce's Ulysses is an essential book. It's deep exploration of narrative forms alone makes it crucial to the study of literature. It's invention on top of ancient narrative makes it vital reading for writers. And rarely has a piece of literature been so wholly 'of a place' as Ulysses is 'of Dublin.'

But Ulysses is a very difficult read. "YES BECAUSE HE NEVER DID A THING LIKE THAT BEFORE AS ASK TO get his breakfast in bed with a couple of eggs since the City arms hotel when he used to be pretending to be laid up with a sick voice doing his highness to make himself interesting to that old faggot Mrs Riordan that he thought he had a great leg of and she never left us a farthing all for masses for herself and her soul greatest miser ever was actually afraid to lay out 4d for her methylated spirit telling me all her ailments she had too much old chat in her about politics and earthquakes and the end of the world let us have a bit of fun first God help the world if all the women were her sort down on bathing-suits and lownecks of course nobody wanted her to wear I suppose she was pious because no man would look at her twice I hope I'll never be like her a wonder she didnt want us to cover our faces but she was a welleducated woman certainly and her gabby talk about Mr Riordan here and Mr Riordan there I suppose he was glad to get shut of her and her dog smelling my fur and always edging to get up under my petticoats especially then still I like that in him polite to old women like that and waiters and beggars too hes not proud out of nothing but not always if ever he got anything really serious the matter with him its much better for them go into a hospital where everything is clean but I suppose Id have to bring it into him for a month yes" 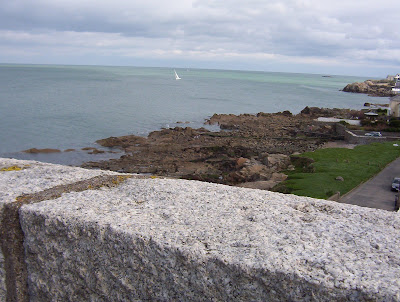 from the tower, where "STATELY, PLUMP BUCK MULLIGAN CAME FROM THE STAIRHEAD, bearing a bowl of lather on which a mirror and a razor lay crossed. A yellow dressing gown, ungirdled, was sustained gently-behind him by the mild morning air."
Ulysses challenges "great readers," adult readers, the way the texts you hand out in school challenge struggling readers.

Today is Bloomsday - the 16th of June, and Bloomsday is when the literary world and the Irish celebrate this book. The novel is set in Dublin on the 16th of June, 1904. The novel follows the wanderings of Leopold Bloom and his friend Stephen Dedalus on that day, in a modern recreation of Ulysses' journey in Homer's Odyssey.

Now, on Twitter, CESNational asks "am curious: why should we read Ulysses?" And I can say, it is an essential part of our literary canon. It is a basic guide to narrative techniques in the English language. It teaches - quite effectively - the differences between the oral and written traditions. Few books have ever mastered the art of recreating a text so well. It will liberate you from the confines school writing courses often encourage.

Plus, it, perhaps combined with Dos Passos' U.S.A. Trilogy

et al, Kerouac, et al, beget the kinds of fiction and narrative we find online today. Those who bitch about the loss of what they perceive as language skills - if they were well read - would know that blaming technology is ridiculous - Joyce started it.

But, as I said, it is very difficult to read. So, what do you do to access this difficult text? You do what you should have your students do. You should find the right path.

The first three times I read Ulysses I listened to a remarkable reading of it on cassette. I think there were 48 or 60 cassettes. Oh, but it was beautiful. The next few times I have listened to it on CD

, via LibriVox download, or, for more detailed study and interaction, via Text-To-Speech, either a WYNN version I've created, or a Microsoft Reader version, to using Click-Speak with on-line text versions.

In other words, I have found my supported text which has enabled me to read and work through one of the 20th Century's essential books, even though I could never read it on paper. And you can too, and so can your students.

Joyce is the perfect author to use to describe why digital text is superior for most learners, for even most teachers have trouble accessing the ink-on-paper version. And so, even if you doubt it's ranking among English-language novels, if you are in education, please give it a try, if only because you might engage a bit of empathy with your students, and you might discover the true value of the flexible text delivery which technology offers.

"O and the sea the sea crimson sometimes like fire and the glorious sunsets and the figtrees in the Alameda gardens yes and all the queer little streets and pink and blue and yellow houses and the rosegardens and the jessamine and geraniums and cactuses and Gibraltar as a girl where I was a Flower of the mountain yes when I put the rose in my hair like the Andalusian girls used or shall I wear a red yes and how he kissed me under the Moorish wall and I thought well as well him as another and then I asked him with my eyes to ask again yes and then he asked me would I yes to say yes my mountain flower and first I put my arms around him yes and drew him down to me so he could feel my breasts all perfume yes and his heart was going like mad and yes I said yes I will Yes."

you've inspired me to reread the book this summer. the last time i read it was in college and i remember laughing out loud a lot. reading over that passage i was struck by the different tangents of thought that would go out a way and then come right back. it made me think the book would be interesting to make a movie of. so i google it and found a movie was made in 67 and 06. have you seen them?