In 1959 the Prince Edward County Schools in the American state of Virginia shut down for five years rather than comply with federal desegregation orders. And all across the United States high schools and universities have chosen to meet the federal Title IX requirements that athletic opportunities be the same for males and females by cutting the number of sports for males, or limiting the rosters of male teams. 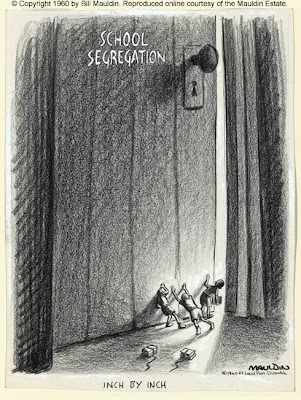 This is how much some educational administrators hate the idea of truly serving a diverse student body. They will destroy the opportunities for all kinds of kids to prevent the success of those they do not want to succeed.

I thought of this last week when a Community College professor wrote to me about video captioning.

But damn if they're not gonna draw the line at showing an uncaptioned video.

This kind of move is nothing but an attempt to destroy the political credibility of the disability rights movement. If "they" can convince "the majority" that embracing rights for those called "disabled" injures most students in some way, they think can convince that majority to reject the Americans with Disabilities Act and Section 504, and similar rules in the European Union. It is the same cynical hate-filled attitude which builds male anger against women by wiping out boys' athletic opportunities. The same cynical hate-filled attitude which told frightened white parents that it was better to not have public schools at all than to have to share those public schools with black children.

You never create access for a deprived group by denying access to anyone. By definition, that does not create "access" at all. The New York City Subway System does not shut down stations while awaiting the installation of elevators. We don't close our libraries until we are sure that every book is digitized. We don't stop everyone from crossing the street at the corner of Main and First until speaking walk signs for the blind are installed. And University of Michigan leaders did not shut their football stadium until they solved their wheelchair access issues.

We don't do those stupid things because that is not how access and opportunity is widened. Instead, the New York City Subways has an access plan which describes how elevators will be installed - over a specific period of time - in all 400+ stations. And likewise libraries that give a damn have scanning programs in place, and/or have joined cooperative efforts with libraries for the blind and organizations such as Gutenberg.org and Bookshare which build their accessible collections steadily. And communities that consider the range of citizen needs never rebuild an intersection without making street crossing safe and accessible for everyone. And even the University of Michigan finally yields to the force of law and agrees to build access into their obscenely expensive stadium remodel. 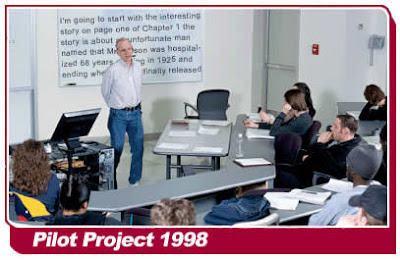 And we thus do not deprive students of the value of videos in the classroom or online because they are not captioned. That is equally stupid. Because, hmmm, I want to ask this Community College's administrators, is every class in every classroom captioned? Is there a sign language interpretor in every class and every classroom? If a video cannot be shown without captioning, then no professor can speak without an interpretor.

So, if someone says something this dumb to you, you need to immediately ask to see your institution's Accessible Materials Action Plan. You need to know how quickly the institution is captioning videos, for example, and how you - as an instructor - get a video moved up the priority list. You need to know what software is available so you - or one of your students - can caption the video and where the workstation is where this can be done. You need to know how you or your student will be paid for this job. And then you can ask how soon all library books will be digitized and accessible, and who on campus is ensuring that every PDF, every classroom handout, every exam, test, or quiz, is fully accessible.

We need to have a reasonable plan to add access constantly and consistently. And if we have that, and we follow that, we will be in compliance - not just with US and European laws - but with our moral responsibility to treat people fairly as well.

Yes, resources are required, there are always costs to rectifying past inequities. But honestly, I don't look around the US or Europe and see any dramatic lack of resources. The money spent on desserts at McDonald's each year could go a long way to solving all of these issues. The money being spent on a War on Iraq, or on America's new Berlin Wall along the Mexican Border, or the subsidies used to support building the world's largest airliner, would get it done. It is all a matter of a society making choices.

So do not let any school administrator bully you. Insist instead that they do their job, and create a plan which will truly bring universal design to your educational institution.

Take a look at the ViaScribe technology behind "liberated learning." Every classroom can be captioned.

Late Addition ALERT! Stanley Fish tackles the Disability Rights Movement in The New York Times - placing us alongside polygamists and NAMBLA for the sake of his argument.

Great post, as usual. The planning aspect of overcoming barriers is too often overlooked by the reactionaries of the world---the same folks who assume you want it all and want it right now.

While we must promote accessibility, we cannot stop those who may be taking their first steps into accessibility. Once they've learned how to make PDFs, then we can tell them about accessible PDFs. Otherwise, whatever about the institution, those at the coalface will shut down.

It's all well and good to have laws and policies, but good practice has to truly embraced by the individual people involved. And this is best achieved by encouragement and education.

A great post as usual. I am preparing a presentation for our IT department that will include accessibility tools on ALL computers in our districts next year. Then the next job will be training everyone on how they are used, and help our professional development staff incorporate the use as a part of good planning and implementation. This is for 12 districts in 7 counties. It won't happen overnight, but people are open and willing. We have a long way to go but it is a start. As you say, start a plan and begin to add - even if it is one school or one room at a time - that makes one more room than we had yesterday.
Thanks Ira.