I watched Ghandi a couple of afternoons ago. I shouldn't of, of course, I should have been writing, but I just couldn't anymore, and the film was on TCM, and despite everything I know about it, I'd never really watched it. So I sat down. And, as much as I can do any one task at any one time, I watched. 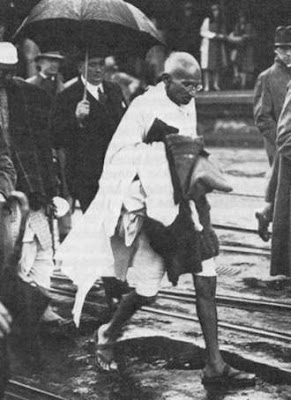 You probably know the film, or the story. And I'm enough of a history person to have known the broad outlines. But as I watched the film a few key things ran across my consciousness.

1. This has always been one of my primary ways of learning. Because I did not read as a child film and television became my literature. Maybe you're the "smart kid" type who read Jane Eyre early, well, I watched On The Waterfront. Maybe you read Dickens, well, I stayed up late and watched the 1930s versions of Great Expectations. Maybe you read "grade appropriate" histories, well, I watched documentaries. I'm not claiming that because of this I got a "better" education than you, but I'm also not willing to admit that my education was, in any way, less valid. Interpreting the relationships and social conditions underlying Jane Eyre in print is no more challenging and no more important than doing the same with the film On The Waterfront.

2. This has always been my entry point into knowledge. For whatever reasons - personality, family training, teachers, I never accepted what I saw in one representation. If I watch this film or that, read this or that, I want to compare the claims made to those made other places. What is "real" in Ghandi? In The Third Man? In Bloody Sunday? In The Kite Runner? In The Wizard of Oz? What is not? What is to be doubted? I have to say that schools have typically been really poor at helping students with this. By confining reading to things declared "authoritative" texts, they eliminate the obvious questions - and the skills which go with the asking of those questions. Does Kansas really look like that? What would Muhammad Ali Jinnah have changed about the film Ghandi? Was Vienna really occupied in zones like Berlin after World War II? Did the RUC really try to talk the British paratroopers out of violence? Is the author really a typical Afghani in any way?

3. The struggle for liberation is always brutal. Certain social structures give power and privilege to certain people. And people who have power and privilege rarely volunteer to give up those advantages. They only yield when they are compelled to. And the compelling isn't usually pretty. British General: "You don't think we're just going to walk out of India?!" Ghandi: "Yes. In the end, you will walk out. Because 100,000 Englishmen simply cannot control 350 million Indians, if those Indians refuse to cooperate." But there's a corollary, which Ghandi exposes because he is that rare individual who, though part of the struggle, fully understood this: The longer you fight against someone, the more you come to resemble them (see WWII Allied "Strategic Bombing" or Abu Ghraib).

5. Romantic Nationalism is as divisive as it is powerful. Irish liberation was tied to Catholicism - by myth if not politics. Israeli liberation was tied to Judaism - both mythically and politically. Indian liberation took the mythic forms of Hinduism. Is it any surprise that Protestants in Ireland and Moslems in Palestine and India could never feel joined to the resulting states?

And today, frustrated, angry, hating the people who create the rules by which I am destined to fail, I read what Rufus had to say about my last post:

"It's weird because, on one hand, reading your essays really has convinced me that I need to update my skill set to include these technologies. On the other hand, you sometimes take this quasi-martial tone about it that makes it difficult to fully accept. "I mean, look, I've always seen my scholarly life as being a matter of having particular tastes. Just like some people enjoy collecting stamps, I enjoy studying history and translating things. I've never seen this as a winner/loser sort of thing, and I've certainly tried not to be I certainly hope I don't seem contemptuous of people who are interested in other things. I definitely don't see them as lacking in intelligence. "So, saying that knowing these new skills would be worthwhile is effective with me. But, sometimes this stuff about winners and losers comes off as hectoring, and if that was going to be effective with me, I'd have gone into computer science long ago after having heard "What are you doing studying history?! The computer science people are making it big!" for the hundredth time. "Anyway, overall, you're making your point. I just might dial down some of the "you have no choice" stuff."

And Vera said, about the same post, "[T]oo much of a us vs. them tone for my taste- aka the losers shall be the winners and the winners- losers."

How do these things go together? Because they do. Because liberation of those repressed because of "print disabilities" or "attention issues" or any "capability issue" at all is the same as national liberation. It has the same socially constructed barriers, the same enemies trying to preserve their advantages, the same need to openly declare ourselves to be "different," and the same dangers of replacing one tyranny with another.

So I need to be careful. It is important to say that if I cannot convert ink-on-paper into digital text, no one in the same situation should be able to convert digital text into ink-on-paper - that's a stubborn illustration of our rights - like saying if you'll only speak English in Ireland, we'll only speak Irish. It is important to say, "I need that in accessible form," even if you may not really need it today - that is solidarity and it is demonstration - just like Ghandi's clothing. It is important to create and hold our own mythic achievements - it is powerful to point out, for example, the school failures of Edison and Einstein.

But we don't want to let the ball roll too far. We don't want to build schools designed only for "us," whoever "us" is. We don't want to create exclusionary environments. Revenge is tempting - of course it is, "come the revolution" and all that, but revenge rarely falls on those who've done the oppressing - instead it smashes innocent bystanders (see, the Palestinians). You understand - if we want to embrace "curb cut theory" we need to make sure we put those textures or ridges in place at the curb line so that those who are blind won't get run over.

There's the idea. Universal Design needs to mean what it says. It needs to mean that every student gets the learning environment they need. So I get all my digital distractions and my sister gets to curl up in a quiet corner with her books.

'Quasi-martial' - a new (to me) and fascinating concept. Like you Ira, I really feel that educators must get with the zeitgeist and battle to keep my tone positive sometimes - as this is all so important and change was needed yesterday IMHO.

It's interesting- the second semester I was teaching, I tried showing an episode of the HBO series Rome in class, pausing regularly to point things out that related to the readings. There were a number of students who said that it really helped them, that they didn't "get it until they saw it", etc. So, I've tried to use more of these sorts of DVDs... the problem is that then you get students who complain that you're "not really teaching".

So I think the real problem is exactly the sort of one-size-fits-all factory process of education. They sort of stick everyone in the same class and let them sink or swim. And everyone has to go at the same pace. Making the factory process "student-centered" really hasn't worked either- especially since the universities never really change anything, aside from firing adjuncts left and right!

I've actually started re-learning Latin, after having done terribly at it in university and had nothing to do with it for 5 or 6 years. It's easier now, and I think it's because I'm working at my own pace. So, if I want to spend three weeks on the first noun declension, I can and do. Of course, at the time, I just assumed I was "bad at Latin".

I would like to see universities change to allow for everyone to work in their own way. But, I don't know how it will happen, aside from starting over entirely from scratch. I think we will need a number of different "new schools", all geared to different sorts of people. I would actually love to see an Asperger's University!

But, I definitely like the model of universal design. I just think it needs to be remembered that we book people are no more flawed than any other sorts of learners. Whether or not the system favors us, I suspect different learning styles are there from birth- certainly, I learned to read before I learned to talk.

In other words, let's let a thousand flowers bloom!

I agree that if universal design for learning is to be authentic, it must be truly universal and include options that work for both you and for your sister.

Still, sometimes it is necessary for the voice in the wilderness to be a bit shrill in order to be heard. The prophet must say things that are controversial in order to get peoples' attention.

i once asked a very successful local environmental activist what was the important factor in her success. she said it was being conciliatory. depends on who you're trying to get to listen to you i guess. if you've read rules for radicals and remember tiananmen '89, ghandi and his followers would have been plowed down early by the communist chinese. you gear the message to the audience.